The current World Bank’s land titling program in northeastern Brazil is a license for land grabbing. 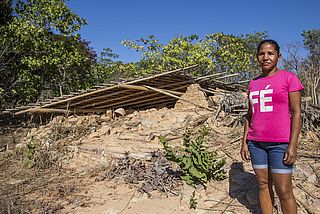 The World Bank is financing a land titling program in the Brazilian State of Piauí, where large areas of land have been grabbed from local communities and illegally occupied by big agribusiness companies. If the program continues unchecked, it will further open the door for a dangerous rush of “legalized” land grabbing, affecting thousands of families and destroying an important ecosystem.

In Piauí alone, 11,000 farmers face eviction, as 4 million hectares of land are being privatized and snapped up by international companies. Hundreds of millions of dollars of investments have flooded into the region as foreign pension funds including U.S. giant TIAA, university endowments such as Harvard, and other financial companies acquire farmlands via Brazilian intermediaries. Internal documents show that the World Bank is aware of the extent of land grabbing and its impacts in the area.

The land being targeted by these international companies is home to descendants of Afro-Brazilian slaves who escaped from slave plantations, and indigenous peoples.

“The World Bank is kicking down the door for big agribusiness investors to grab land in this important region of Brazil. Local farmers, who have occupied this land for generations, are being forced aside in the pursuit of a quick profit, and the cost to livelihoods and the environment will be huge.

“Local people’s rights must be respected. The World Bank knows the damage its land titling program is causing and must suspend it immediately, and start talking to the local communities and civil society organizations.”

The Brazilian Public Prosecutor’s Office intervened on December 18, 2017 and issued a formal recommendation to the World Bank to suspend the land program, which has been ignored. It also pointed to the need to address the violations of the land rights of traditional peoples and communities that have already occurred under the World Bank’s project.

“The World Bank must adhere to the recommendations of the Public Prosecutor,” said Fábio Pitta, from Rede Social de Justiça e Direitos Humanos. “Piauí’s land regularization program and its corresponding legislation need a complete revision to guarantee local communities control over their lands and to put the destructive and violent expansion of monocropping plantations into reverse,” he added.

As the World Bank’s Annual Land Conference starts in Washington D.C., Brazilian organizations and their international partners are calling on the bank to suspend its support for the land titling program in Piauí.